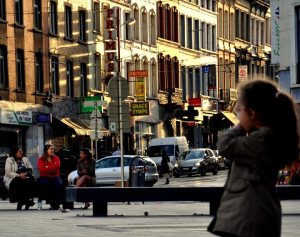 You can not overhear the honking. In the five lanes of Rue de la Loi in the European quarter in Brussels bumper presses against bumper. The light turns green, but left-turning cars blog the crossing. Pedestrians walk through a fog of exhaust fumes over a cross-way full of parking cars. In between the chaotic accommodation of metal stands a police officer wearing a yellow vest. This city is a chaotic, says blogger Bleri Lleshi, but he likes that because he is chaotic himself.

Bleri’s life is multi-sided: He is a philosopher, a writer, a filmmaker, an activist. His blog is all of this wrapped into one. “The blog is a part of me,” he says. “The topics for it are born in Brussels: multiculturalism, Brussels’s youth, migration, but also poverty and social problems. “Brussels may not be the best city. But you should make the place where you live the best. Only if you get involved does the place you live becomes your home.”

Originally, Bleri’s home was Albania. Today he lives about three kilometers away from the busy streets of the European quarter, at Place Eugène Flagey. Why did he stay? In a grand gesture he points over the square where the air is rich with coffee and the sound of different languages. “You can see why!”

60 percent of the people living in Brussels are not of Belgian descent. “An enrichment” says Bleri, “but to people in Flanders Brussels comes across as a jungle,” he says. There are prejudices,  especially concerning young people in Brussels, he says. This is what he wants to change by giving the youth in Brussels a platform: his blog. He has already published 20 letters, written by youth between 16 and 26 years old. They are addressed to the almost 30.000 unique users who visit his blog each month.

One of the authors is 19-year-old Rabia Uslu. Five kilometers from Flagey towards the center, she is sitting under the wooden ceiling of the cultural center “La Tentation”. “Are you here for the debate?“ she asks a young man, his glasses pouring with raindrops. “Two floors up.“ Underneath the rove of the old prick house, Bleri is debating with young adults. „He is the first one that talks about us,“ Rabia says, “He puts our thoughts into strong words.“

For his strong words Bleri is known and asked for. He freelances for magazines and newspapers and gives speeches. That is how he makes his living. He does not earn any money from his blog. He is against advertisement and he is critical when it comes to asking for voluntary contributions. But no money does not mean no effort: In two and a half years he published 250 articles on his blog.

In the streets of Brussels, ideas often hit him unexpectedly. Like the one time around Christmas, when Grand Place – Brussels jewelry case – glittered even more than usual and the smell of waffles, which is characteristic for the city, mixes with cinnamon. Stepping out of this atmosphere and into his bank at Place Eugène Flagey, Bleri was struck by the strong odor of urine. A homeless person was seeking shelter in the bank. Bleri held his breath and within seconds an article was being written in his mind. Why do we just ignore the homeless people in the streets? Why does the city not care about them? What can be done to improve the situation? “Sometimes, I do not write a word for days. But then there are hours in which I produce more than others do in a whole week,” Bleri says.

Bleri‘s mind works like the Rue de la Loi. Sometimes it just flows slowly. Then, when if there is an idea rushing through, he has to scrawl it on a coaster or within the columns of a newspaper because there are already other ideas following – bumper pushing bumper. And beware if something is blocking the crossing.